First entry in a new series by Julie Mulhern

I’ve enjoyed Julie Mulhern’s Country Club murders mysteries. When I saw that she had started a new series, I bought the first one without a moment’s hesitation.

I’m glad that I did, though the subject matter is quite different. It is still a mystery series and is funny as a hoot. However, this series is set present day versus the 1970s.

Because of the change in time, a lot of modern thinking is to be found in the book versus that of the society around fifty years ago.

END_OF_DOCUMENT_TOKEN_TO_BE_REPLACED

The Golden Tresses of the Dead: A Flavia de Luce Novel 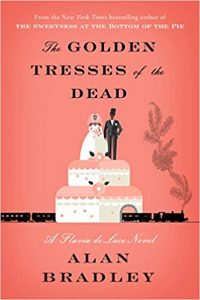 I’ve enjoyed every book that I have read in the series. I was captivated by the character of Flavia de Luce right from the very first. Her character has grown considerably even though she is still only twelve years old.

She is still working with her poisons which continue to captivate her but she is also actively solving mysteries as part of the Arthur W. Dogger & Associates, Discreet Investigations group (of two – Dogger and herself.) With the maturing of the group, there has been a change in how the mysteries are being solved.

Dogger has emerged as a kind of Sherlock Holmes type character. He seems to the the individual who comes up with conclusions while Flavia is more of a Watson type who has access to her laboratory for testing bits and pieces for poison, et al. She sits in admiration as Dogger states the case, proposes action, and comes up with solutions. He also seems to know the chemical essentials of what Flavia will be testing, so Flavia is relegated to almost a technician status.

END_OF_DOCUMENT_TOKEN_TO_BE_REPLACED

Another laugh out loud entry is this cozy mystery series 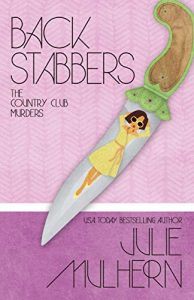 I have read and enjoyed every single book in this mystery series. I enjoy it so much, I recommend it whenever I can. As far as cozy mystery series go, I don’t know if you can do better.

The series is set in Kansas City during the 1970’s. The characters are part of the upper crust, country club herd.

Ellison Russell is our sleuth extraordinaire. While she is part of the country club group by birth, she is busy trying to break out and make a life of her own. Well, except it is pretty nice to have the money and the house and the… you name it. She also has a teenage daughter who is as flip as you can imagine.

END_OF_DOCUMENT_TOKEN_TO_BE_REPLACED

This is one of my favorite cozy mystery series. It is funny and has great plot lines which parody well known places, plays or movies. In this book, the parody is of Camelot. I won’t give away the parody line as it is a surprise.

Ivy Meadows is an actress who, under her real name Olive Zweigart, is a private detective in training (under her uncle who admits he is the best PI in the state of Arizona.)

Ivy shimmies and jingles her way through a Renaissance fair as a mute belly dancer. Why mute? Because her “Cockney” accent grates on everyones nerves. She is there to investigate a murder on behalf of the fair.
END_OF_DOCUMENT_TOKEN_TO_BE_REPLACED