The Look-Alike: A Novel

This is the story of Sienna Scott. Ten years before, she found a murder victim. Because of the stress involved with having seen the crime, she left home and headed for England and stayed there for ten years.

She decides to head home again to pick up the pieces of her old life. She has conveniently forgotten the pain of living with her mother, who has mental illness and causes much distress for her daughter.

There are three big reveals in this book, the whodunnit and two others. I solved all three within a page or two of meeting the pertinent characters. I don’t think it was too difficult to do so.

However, Sienna doesn’t seem to see the troubles lying ahead. Also, she falls into a physical relationship with someone she really doesn’t know and then, as quickly, falls in love with him.

END_OF_DOCUMENT_TOKEN_TO_BE_REPLACED

Funny second in series set in an Amish Cupcake shop 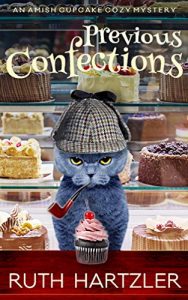 This is the second in a series set in an Amish Cupcake shop. Jane Delight is the sleuth, along with her roomies and buddies, a pair of older sisters, Eleanor and Mathilda.

Jane was previously Amish and has run own to her sister, Rebecca who is still in the faith. Jane lives above the shop with her friends and helps Rebecca to help pay her way.

Jane’s ex-husband, Ted, is a rather slimy lawyer and when he hits town with his new wife, Cherri, Jane is forced into meeting him regarding some papers he is attempting to force her to sign. Jane is smarter than that.

However, in the midst of their meeting at a local and expensive restaurant, a man is murdered. When suspicions fall on her ex, Cherri begs Jane to help solve the mystery and find the real killer. Jane agrees both because she feels for Cherri and because Mathilda and Eleanor are itching for a new murder to solve.

END_OF_DOCUMENT_TOKEN_TO_BE_REPLACED

So much fun I was laughing out loud

The Quiche and the Dead (A Pie Town Mystery Book 1) 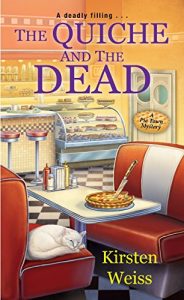 Valentine Harris, known as Val to just about everyone, has come to San Nicholas to build a new life with her fiance. Part of that is opening a pie shop using her recently passed away mother’s family recipes.

The engagement has already been broken as the book begins. Val is trying to rid herself of the last reminder of their time together, her very expensive and unused wedding dress.

Still, she is making a go of running her shop, known as Pie Town. This, in spite of her next door neighbor, Heidi, who is running a gym and hates that people eat sugar. Heidi seems to simply hate Pie Town and Val as well.

A customer drops dead in Pie Town, after eating one of her homemade pies. Because of that, Val becomes a suspect when it is found out that he died of poisoning.

END_OF_DOCUMENT_TOKEN_TO_BE_REPLACED

Big Lies in a Small Town: A Novel 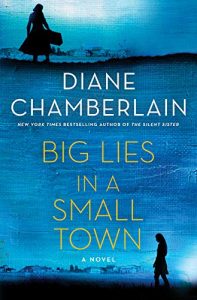 I’ve read only a few books by author Diane Chamberlain. Each book has caught my attention and left me wanting to read more of her works. Thus far, this book is my favorite.

This is the story of two young women. In the past, Anna Dale, an artist. In the present, Morgan Christopher, an art student who is also in prison when we first meet her.

Morgan has been given a job to do that she doesn’t feel and, in fact, is not qualified to attempt. She is given the choice of staying in prison and serving her time or doing the work, by an impossible date in Edenton.

END_OF_DOCUMENT_TOKEN_TO_BE_REPLACED

When I started reading this book, it seemed a little out of date for today. I wasn’t sure if I was imagining it or if it had been earlier. It turns out to be the latter. The book was release close to a decade ago and in some ways it shows. Having said that, I still enjoyed reading the book.

Dulcie, Liza and Pru are all friends. At the beginning of the year, they all get together and find out what each one wants.

Liza has never been married and would like to find someone to love who doesn’t bore her silly after a few weeks.

Pru is married to someone that neither of her friends like. Pru is happy and wants to stay that way with her husband.
END_OF_DOCUMENT_TOKEN_TO_BE_REPLACED