A funny start for a new cozy mystery series 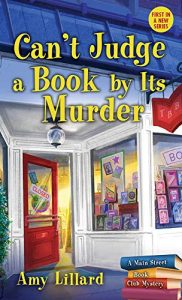 Amy Lillard is a new author to me. I so enjoyed this mystery, I’ve now finished the first book in her Amish mystery series.

This book is not about the Amish. It is set in a small town where everybody knows everyone else’s business.

Arlo Stanley is co-owner of a bookstore and coffeehouse. She is responsible for the books and her business partner, Chloe is in charge of coffee and food.

Arlo is gearing up for a whirlwind weekend as the local boy who left town and made good as an author is going to do a book signing at her store. Instead, he show up dead on the sidewalk in front of the bookstore. As Chloe has had a relationship with him in the past and had seen and talked to him the morning of his death, suspicion falls on her.

END_OF_DOCUMENT_TOKEN_TO_BE_REPLACED

I love reading about the Sun City West Book Club 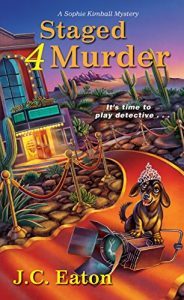 This is a wonderful series about a woman in her mid-forties, Sophie Kimball, who has moved from Minnesota to Arizona to spend time with her mother, escape the snow, and to work from an old-trusted friend.

Sophie worked in the accounting department at the police station that her new boss worked at as a detective. He has now retired and has opened a private detective agency very close to where her elderly mother lives. Sophie now works as his accountant.

Sophie’s mother, Harriet, assumes that Sophie is able to investigate crimes because all the police expertise must have rubbed off on her.

END_OF_DOCUMENT_TOKEN_TO_BE_REPLACED

Second in series is better than the first book 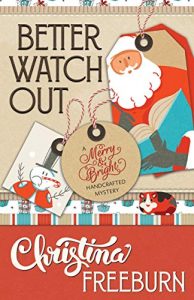 This is the second book in this new crafting series by Christina Freeburn. Merry Winters is the sleuth and is the co-owner of a Christmas theme crafting business.

Merry has a problem with tears. So much so, you could do a drinking game when they are mentioned but better to do it with non-alcoholic beverages as I wouldn’t want you to become too inebriated.

Merry also has a little bit of an issue with opposing any form of authority. She can’t seem to take a suggestion from her friendly police force. Instead, she runs headlong into situations that put her or her loved ones into trouble.

END_OF_DOCUMENT_TOKEN_TO_BE_REPLACED

Owl Be Home for Christmas: A Meg Langslow Mystery 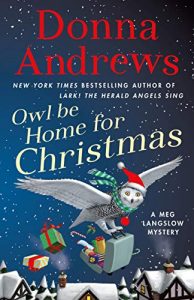 It’s hard to believe that this is the twenty-six Meg Langslow mystery. One would think that such a long-running series might be running a tad low or at least out of bird puns on titles.

Neither of those are true of this series. Each book is funnier than the last. The bird puns continue apace and give a clue as to the story. This is one of my favorite series and I have read it faithfully since the first book was published.

In this story, Meg and family are snowbound at the Caerphilly Inn along with 200 plus ornithologists who are attending a scientific conference about owls that Meg’s grandfather is hosting.

There are many discussions about various owls, which you might be thinking would be kind of dry. However, when people are passionate about their subject, they can come to fisticuffs with those who disagree with them.

END_OF_DOCUMENT_TOKEN_TO_BE_REPLACED 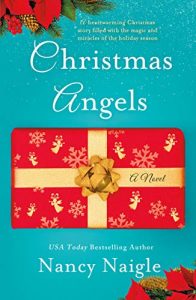 For the last three years, I’ve enjoyed reading a Christmas novel by Nancy Naigle. All three have been set in various small towns in North Carolina. While I am not from that area, my mother grew up in the mountains outside of Asheville during the latter years of the Great Depression. It’s always a treat to get a peak at that area of the country.

In this story, Liz Westmoreland is a successful project manager. She has always dreamed of owning an Inn or Bed and Breakfast like the one that her grandparents ran for many years. Truth be told, Liz wanted their old inn, Angels Rest but it was sold years before.

When the opportunity arises to buy the old inn, sight unseen, she grabs it. Reality hits her square in the face too late when she finds it in total disrepair.

END_OF_DOCUMENT_TOKEN_TO_BE_REPLACED

A heart-warming tale of Christmas in Nantucket

Let It Snow: A Novel 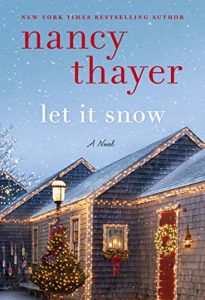 In Nancy Thayer’s latest novel, it is Christmas time in Nantucket. Christina Antonioni is the owner of a toy store that is located in a set of historic shacks on the wharf in Nantucket. Along with the other owners, they scramble to make ends meet, especially during the winter when visitors don’t often arrive at the island.

A young girl, Wink, becomes a valued friend who helps Christina during the busy Christmas season.

The shop owners are shocked when the new owner of the wharf raises their rent to a degree that is unfeasible for all. Christina, by nature of her relationship with Wink and with Wink’s uncle, is voted the voice of the shop owners to speak with the wharf owner. That is because Wink and and uncle are granddaughter and son of the Scrooge of a landlord.

END_OF_DOCUMENT_TOKEN_TO_BE_REPLACED 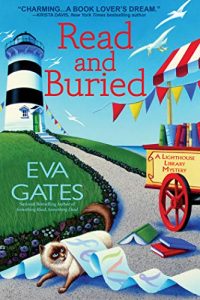 Lucy Richardson is a librarian at the Lighthouse Library in the Outer Banks of North Carolina. The historic lighthouse has developed series issues and is being fixed. During the excavation of the ground around the Lighthouse, a old tin is discovered. What is discovered in the tin sets in motion this whodunnit.

Lucy and her boyfriend, Connor (who just happens to be mayor) come across the body of an annoying member of the historical society. Unfortunately, that body is located in the business office of the Lighthouse and is deemed a murder.

END_OF_DOCUMENT_TOKEN_TO_BE_REPLACED

A roller-coaster ride of a mystery novel!

This is the first book I have read in this series. After starting it, I realized there were previous books but I was able to easily read this book stand-alone. It just made me want to go back to the beginning and start with book number one, which I have since purchased.

The story is set in the Cotswolds, where husband and wife police duo, Duncan Kincaid and Gemma James, have been invited along with their children to spend a relaxing weekend, along with co-worker, Doug Cullen, as a guest of another co-worker. That co-worker, Melody Talbot, turns out to be from a family that is quite wealthy as well as powerful.

The story begins with an introduction to Viv, a chef who is to cater a luncheon for Melody’s mother. She has been hiding her light at a small pub that she co-owns, rather than spending her time making a name for herself in London. She wants to spend more time with her daughter, Grace, who is eleven years old.

END_OF_DOCUMENT_TOKEN_TO_BE_REPLACED

Not my favorite book in this series

I’ll start off by saying that I have been a real fan of this series. For some reason, though, in this book, the author has changed her style tremendously.

Instead of action, there is a lot of talk. A whole lot of talk. Rather than sleuthing, it seems that TJ talks to her boyfriend Kyle, to the police friend Roy, and to just about everyone else about what happened and what her various pet theory of the moment is.

END_OF_DOCUMENT_TOKEN_TO_BE_REPLACED 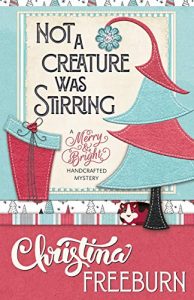 I’ve read other books by this author, so I thought I would take a chance on reading this new series. I love Christmas and Christmas-themed books, so a book about a Christmas crafter seemed like a natural fit for me. In many ways it was but, on the whole, I would rate it as a 3.5.

The plot and the dialog of the story are very appealing. What is a little less appealing is the main character, Merry Winters. While I like facets of her quite well, she seems to be out of control emotionally (lots of tears.)

Another less appealing aspect of Merry is her inability to stop herself from doing things that put her at risk. When she is told not to do something, you can bet your bottom dollar, she’ll be doing it shortly.