I purchased this in a local big box store and am impressed by the quality of the kit. If I could, I would give this kit a 4.5 star rating (explained in my review.) The kit includes enough yarn to finish three projects (Charlie Brown, Snoopy, and Woodstock), after that, you will need to purchase additional yarn, fiberfill, and black floss to finish more. The kit does not say exactly what size the yarn is but it seems to be at most a 3 and it appears to be acrylic yarn versus cotton or wool. Interestingly, the yarn in the Disney kit seems to be of better quality than that in the Peanuts kit. The colors included are: white, yellow, beige (flesh tone), light brown, and black. The floss is black and appears to be cotton. Also included is a tapestry needle (for the floss), fiberfill, and two inexpensive crochet hooks – a size 4.00 (US G/6) and and size 5.0 (US H/8). There are also fairly detailed instructions including many diagrams.

END_OF_DOCUMENT_TOKEN_TO_BE_REPLACED

Great second book in this funny and informative mystery series 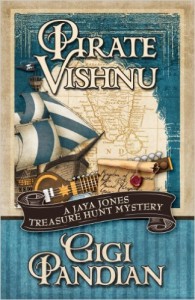 “Pirate Vishnu” is the second in a series of mystery by Gigi Pandian. The series features Jaya Jones, a young Indian-American history professor. I really enjoyed the first book in this series “Artifact” and was hoping the second would be almost as good. Actually, it was even better. This whodunnit chases all over the map from San Francisco to India and back again.

Jaya is once again joined by her friends Lane, Nadia, and Sanjay. Along the way, we get a brief history lesson about San Francisco at the time of the Great Earthquake of 1906, some of the signs of struggle of the Indian people against the British colonial rule, and also about magicians and the “spiritualism” trend of the turn of the last century. In addition to the friends we already know, we get introduced to several new characters that I hope to see in future books – Tamarind the librarian (a kind of goth meets punk lady) and Naveen, an unpleasant fellow professor who is Jaya’s competition for tenure at their university.

END_OF_DOCUMENT_TOKEN_TO_BE_REPLACED

“Basic Law” is the first book I have read by J. Sydney Jones. It took me a few pages to get caught up in the book but once I did so, I really could not put it down. I wonder if the use of present tense interfered with my initial enjoyment of the book – it is a recent trend that I have noticed in suspense/mystery books and one that I am not entirely comfortable with as yet.

The story is set in primarily Germany during the early to mid 1990s. I mention this because I had to gleam it from the book as I read along. I thought at first that it was set in the present but that would make the protagonist a man in his sixties and that didn’t match his actions and physical abilities. The action races across Germany, Austria, Crete, and the Czech Republic and back again.

END_OF_DOCUMENT_TOKEN_TO_BE_REPLACED 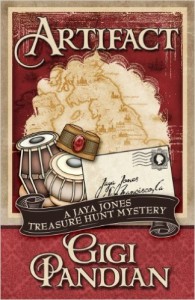 “Artifact” is the first book I have read by Gigi Pandian. I have been a cozy mystery fan since my early teens when I first discovered mysteries by Elizabeth Peters (under all of her aliases), Georgette Heyer, and others. Back in the day, having a female protagonist in a mystery was unusual and I was immediately captivated by Ms. Peters’ Amelia Peabody and have read every book since. When Ms. Peters recently passed, we lost a great mystery writer.

The heroine of “Artifact” Jayla Jones, reminded me of Amelia Peabody but in a much more updated and sassy sort of way. It may be that the subject of archeology is common to both characters but I think it has as much to do with attitude. While Jayla brought Peabody to mind, she is very much her own character. In one individual, the author brings together Asia and the New World and then promptly plants her in the wilds of Scotland. Truly a global character.

END_OF_DOCUMENT_TOKEN_TO_BE_REPLACED

Where They Found Her: A Novel 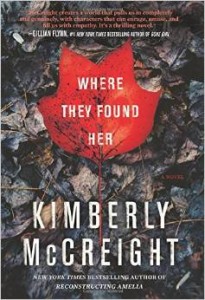 “Where They Found Her” is a multi-layered mystery that kept me in suspense for most of the book. While there were elements of the story that I solved very early on, there were others that were a complete shock and surprise to me. The clues where there when I looked backwards but I never expected so many “whodunnits” to be tied together in one book.

The author expertly wove the various story lines together using a variety of written works, including an old journal, a newer journal, online newspaper articles, and first and third person narratives. It didn’t take very long to understand the reason for the various sources as they started forming a single story. It was kind of like seeing a painting being painted from the outer edges in toward the middle.

END_OF_DOCUMENT_TOKEN_TO_BE_REPLACED

Worthy addition as book 4 to the series 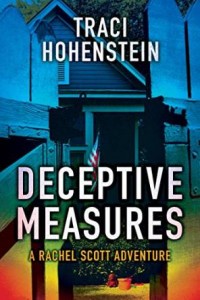 I have read most of the books in this series. In some ways, “Deceptive Measures” reads almost as a conclusion to the series. I hope that is not the case as I have enjoyed reading it. It is as equally fast-paced as its predecessors and packs a lot into a fairly short novel.

In the story, the protagonist (Rachel) is chasing clues about her daughter (who was kidnapped years before.) She is convinced that she will find her daughter and is tenacious about it. This tenacity is one of the most outstanding, and to me believable, parts of this series. I can’t image any loving parent giving up on find their child. It is interesting that Rachel has taken her search and created not only a career for herself but also a fairly substantial business who are dedicated to finding individuals who have been snatched.

END_OF_DOCUMENT_TOKEN_TO_BE_REPLACED

The characters and the story were wonderful to read

Postcards from the Past

“Postcards from the Past” is the first Marcia Willet novel that I have read. It is always a real pleasure to find a “new” author who turns out to be an incredibly established one with a huge back list of books for me to enjoy.

The characters in this book seem to have stepped into the book from real life. With Ms. Willet’s excellent ability to describe people and places and to put real words into the mouths of her characters, I felt very quickly as if these were people I knew and cared about. The story is primarily about a middle-aged set of siblings, their kind of relation Dom, and a shadowy figure from their past. The past is woven into the present as the book unfolds and we get to know each of these individuals a little better chapter by chapter. With each, we see some good and some not so good parts of their character.

END_OF_DOCUMENT_TOKEN_TO_BE_REPLACED 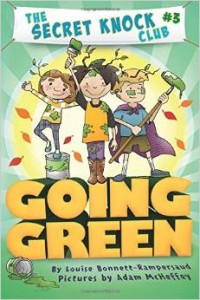 I have a couple of other books by Louise Bonnett-Rampersaud, including one of my favorite board books “How Do You Sleep?), so having an opportunity to read and review another book by this author was a real pleasure.

“Going Green” is the third book in the Secret Knock Club. The Secret Knock Club is a group of six third graders (three boys and three girls) who get together and do things for their community. In “Going Green”, the kids get to chose their kindergarten buddies – a child that they will get to help tutor and do fun things with. I don’t know if this is an actual thing that is done at school these days but it really sounds like a fun program if the kids are matched up well.

END_OF_DOCUMENT_TOKEN_TO_BE_REPLACED 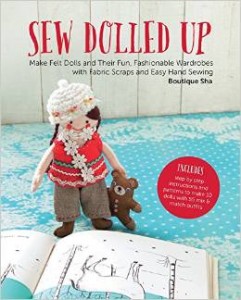 I first learned to sew by hand when I was ten years old and in elementary school. Our student teacher that year had convinced our school principal that a good art project for the year would be teaching our class to hand sew felt dolls to be given to an orphanage in Tijuana, Mexico. I remember how difficult it was to learn to sew such tiny little stitches as were needed to keep the stuffing inside the dolls. I soon learned to love our art period (only one hour three times a week) and to try to make as many dolls as well as I could.

END_OF_DOCUMENT_TOKEN_TO_BE_REPLACED 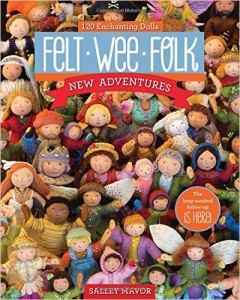 In “Felt Wee Folk New Adventures”, there are so many types of dolls – boys and girls. They are made with a variety of materials including small wooden beads for heads and pipe cleaners for arms, legs, and wings. Felt, however, is the primary material used for these dolls.

The author gives detailed instructions on how to photocopy her patterns and create templates (if you plan to make more than one or two of the same dolls.) As I am heavy into crafting, there wasn’t anything I needed to purchase before beginning a couple of the doll projects. I have already completed the first two I started and am ready to do some more.