Diggin’ Up The Dirt (A Kenni Lowry Mystery Book 7) 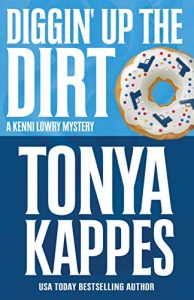 That is how I would classify the Kenni Lowry series. Mystery whodunnits that involve a ghost.

Kenni Lowry is the sheriff of Cottonwood, Kentucky. Her Poppa (grandfather) was the previous sheriff and passed away in office. Kenni has been sheriff for several years and midway through that time, her Poppa showed up (in ghostly form) to help her solve the first murder that occurred while she has been in office.

Since the, he shows up when murders occur. That is the case in this book. It also puts Kenni in the uncomfortable position of knowing a murder has occurred before the medical examiner concludes it.

She and her boyfriend, Finn, who is her deputy and the crew which generally solves the crimes. They have recently added a part time position for another deputy. In this story Kenni and the new deputy are the ones who are looking for the answers to the whodunnit. Kenni, by simply asking, finds out that Finn will someday want to be a sheriff. She is instantly on her guard that he wants her job.
END_OF_DOCUMENT_TOKEN_TO_BE_REPLACED