A murder mystery series revolving around a group of intrepid quilters 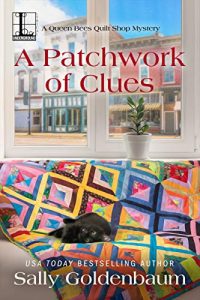 “A Patchwork of Clues” is a new murder mystery series which involves a group of quilters who meet at the Queen Bees Quilt Shop. It is an ensemble cast though Portia Paltrow (aka Po), is the central character in many ways. To be honest, I keep thinking of Kung Fu Panda, each time I read her name and it was a bit distracting!

As with most book series which a large group of characters, much of the first book is spent introducing each character and how they relate to one another rather than in the actual whodunnit. The plot of the mystery was interesting but I would have liked it fleshed out a bit more. I expect that future books will give more details.

A murder occurs right outside their favorite store and, for a time, the quilters have to meet at Po’s home. While there, they decide they must solve the murder and remove suspicion from the quilt show owner.