Sealed Off (A Maine Clambake Mystery ) 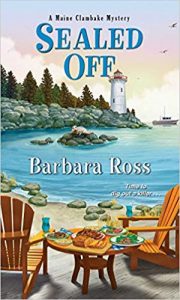 This is the eighth book in the Maine Clambake mystery series. It is the first book I have read by author Barbara Ross. While I read it stand-alone, I suggest reading the earlier books as I was confused by the relationships as well as the characters. It was a little like dropping into a movie halfway through.

The book is definitely more dramatic than not. Generally, I expect some humor in cozy mysteries and this book did not have that. While not a suspense book, it is more of a straight mystery.

The characters live on the coast of Maine and make most of their money during the tourist season when people come to their lovely town and want to indulge in a real Maine clambake. My husband is from Maine and when I described the clambake to him, he agreed it was authentically portrayed.

The family has their share of drama with all sorts of revelations, both personal and historical, and some of those are contained in this book. There are multiple mentions of other things that had occurred in earlier books as well.

When a body is found on the island where the clambakes are held, suspicions fall immediately on the ex-con.

It’s hard because he is the brother of the sleuths boyfriend. She starts investigating to find out if he is guilty or if he is being set up to take the rap.

There is a look to the past as a diary from the 1800’s surface while the mansion on the island is being renovated for use for the clambakes and to further the opportunity to make more money during the tourist season.

An old mystery comes to light and those involved start looking for answers to that mystery as well.