The series pivots in this book 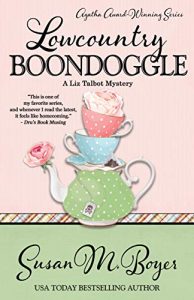 I’ve read most of the books in this series and have enjoyed them all. It is a series set on an island just off shore from Charleston. Liz Talbot and her husband Nate Andrews are private detectives. They are assisted, from time-to-time by the ghost of Liz’s high school best friend, Colleen.

In this story, the two are contracted to look into the murder of a professor. His nephew is the prime suspect and looks guilty. They are asked to investigate on behalf of one of his business partners, whom Liz already believes to be guilty in an earlier murder.

The story moves back and forth and sideways, with clues pointing to many individuals. By the time the whodunnit is revealed at the end, I had just figured it out. I like a story that keeps me guessing but gives clues that allows me to solve the mystery and this was exactly that.

There is a subplot about the future that brings about a pivot in the series. I was not expecting it and look forward to seeing how the storyline continues.