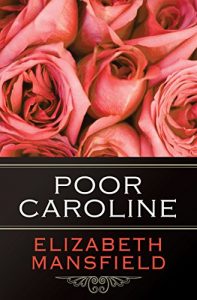 I’ve recently been reading Regency Romances, both older and newer published novels. This is an older book that has been recently been published as an ebook. I had read other Elizabeth Mansfield books years ago but this is one that I had not read before.

The book is funny and has a cast of characters that keep bringing you back to it. Caroline Whitlow is a proud young woman. She has always been so. She can’t take “charity” from anyone. The problem is, she doesn’t always understand that what she sees as charity is, in fact, simple kindness.

She and her two younger brothers move out from the home they have been living in for twelve years when the new heir is coming home.

The heir is unaware that they even exist. Kit Meredith is a kind man and is distressed to know that he is now viewed as kicking the three individuals out. The village is up in arms against him and he goes to London to track the three down.

All sorts of hijinks ensue, including hidden identities, lives saved, evil employers are all included. While Caro is stubbornly holding onto her pride, life just may be passing her by.

This is a Regency Romance is the true tradition of the word. Regencies were clean novels while historical romances had sex and profane language. That line seems to have been crossed recently so that those of us who prefer clean stories are sometimes fooled into buying stories with sex scenes in them. That is not the case with this story. You might want to shake Caroline occasionally but you will unknowingly suddenly invade the sexual lives of the characters.

This entry was posted in Romance. Bookmark the permalink.