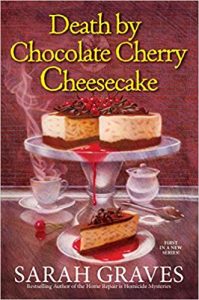 This is the first book in the Death by Chocolate mystery series. It is the second book by Sarah Graves that I have read and it is quite different. I didn’t know what to expect as the other book was more of a serious mystery.

I love well done mysteries that have a comic twist and this book is just such a book. I didn’t realize that it was a spin-off of an earlier series with the same characters. Having found out, I have picked up the first in that series as well.

Jake (Jacobia) Tiptree and her friend Ellie have moved on from renovating houses (old series) and are now co-owners in a newly opened bakery shop that features all sorts of chocolate baked goods. They are feeling their way and starting to gain clients when local pain, Matt Muldoon is found murdered in their bakery kitchen.

Suspicion veers towards Ellie, which means that Jake and Ellie have to find the real killer before Ellie is taken away. Someone has gone out of their way to set her up, so it takes some skill and a lot of crazy antics to sleuth out the murderer.

There are so many characters that made me laugh. There were definite bad guys and good guys and then there were those it was hard to pin down.

I was surprised by the ending, which is not usual, but there were clues mixed in with a lot of red herrings. I enjoyed the book so much, I am reading further in this series as well as starting the old one.

This entry was posted in Home/Garden. Bookmark the permalink.