A feel good novel with a heroine with some OCD issues

Posted on February 5, 2019 by Iiiireader

I Owe You One: A Novel 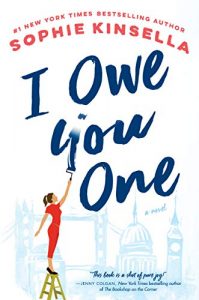 Fixie Farr is a young woman who works in the family business (retail store). She and her mother more than carry their own weight since her father died years before. His motto was “Family first” and Fixie tries to adhere to it, though her siblings are a bit of a trial.

Neither her brother nor her sister seem to have the same work ethic. Brother Jake is busy making posh deals that seem more like pie in the sky than anything concrete and meaningful. Sister Nicole is into appearances over substance and has a fixation on yoga and Instagram.

Fixie does the works and fixes things that her siblings and co-workers at the family business cause to “break”. When her mother leaves for a vacation, she leaves all three in charge with their uncle to keep things running. Without her mother’s vote, Fixie has to keep things from coming unglued.

In her personal life, she has had an almost life-long crush on her brother’s friend, Ryan. After many years, it seems like a relationship can become a real thing. Problem is, Fixie is once again having to fix everything, including helping Ryan get a job.

Fixie, as usual, helped a complete stranger and the stranger, Seb (Sebastian) gives her an IOU. Fixie is put into the position of calling it in and the rest of the story ensues.

I really enjoyed the book but was a little surprised by a somewhat graphic sex scene. At that time, it seemed out of place, but as the story developed, it showed the way a relationship was going to end up.

The only thing that I wish had been dealt with more emphasis was the obvious OCD issues that Fixie has. There are physical manifestations that show a deep-rooted problem. It would have been nice to have Fixie seeking some counseling to help her control her tendencies in this area.

This entry was posted in Fiction/Literature. Bookmark the permalink.