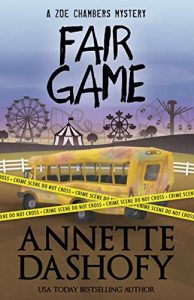 Zoe is a country girl and has always been crazy about horses. Pete is a city boy and has had to learn more about the country life than he ever expected to by way of his job. They currently live in town, close to Pete’s job. Zoe has a run-down horse farm that is currently more of money pit than a home. She is able to stable her horse, Windstar, there while she slowly fixes it up.

The perspective of this book, as the previous ones in this series, alternates between Zoe and Pete. Their jobs necessarily cross over many times in the investigation of crimes.

The setting of “Fair Game” is the county fair. Zoe is there to show her horse, though it is somewhat unexpected and certainly unplanned for. The crime that is being investigated, early in book, happens elsewhere but the friends of the victim and the later principle suspects have centered at the fair.

The crimes in this book are also centered around the fair and around 4H. Zoe feels compelled to investigate, not only because of her job but because the people involved are anywhere from acquaintances to close and dear friends.

In addition to other fair and carny activities, the book covers a school bus demolition derby. Turns out that this is a real thing and, when not involved in a murder mystery sounds to be fun to participate in and to watch.