A funny start to a new series 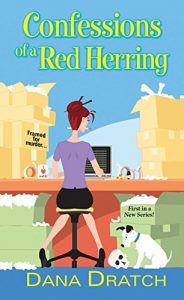 Alex Vlodnachek is the sleuth of this story. She was a reporter (at low pay) for many years. Just a few months ago, Alex left her newspaper job for a high-paying job in public relations. The PR firm she works for leaves a lot to be desired. They push their employees to work crazy hours and seem to fire them fairly quickly.

When the boss tries to “give” Alex to a client for a night, Alex chews him out in public and figures she is out of a job. When the boss turns up murdered, Alex becomes the number one suspect. People who were her work-friends turn against her and blame her as well.

If that wasn’t enough, members of Alex’s family descend upon her. It is a plot, obviously, to drive her completely insane. Though, not crazy enough to stop her from noticing the new good looking, Englishman who has purchased the neighborhood wreck across the street from her home.

Alex turns to her newspaper roots and looks for the real murderer. Along the way, we learn to love the crazy family as well as the crazy neighbors.

The story is fun and funny. The mystery is good as well. I had a lot of fun following the “red herrings” the author left in the story. I’m looking forward to reading the next book in the series and finding out where Alex sleuths next.