Lots of fun and clues

Death at the Salon (A Daisy Thorne Mystery Book 2) 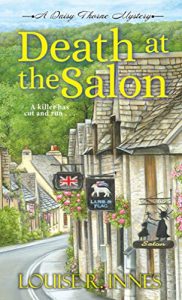 Though this is the second book in this series, it is the first book that I have read. I enjoyed it and will go back and read the first book as well. It is a cozy mystery and is set, primarily in a beauty salon named Ooh La La, in a small town in England.

The proprietor of the salon and amateur sleuth is Daisy Thorne. Daisy has been studying Forensics Psychology with an eye to becoming a profiler for the police one day. When a regular customer is found murdered outside her salon, Daisy comes under suspicion.

She is not the only one who is a suspect. Way too many people had motives and opportunity and Daisy’s detective friend, DCI Paul McGuinness, has his hands full following leads and trying to corral Daisy into not investigating the murder.

There are lots of red herrings that take you from one suspect to another. Daisy’s relationship with Paul is at risk but still she chooses to do what she has to in order to clear herself and those she loves of suspicion.