The Dead Cat Bounce: A Home Repair is Homicide Mystery 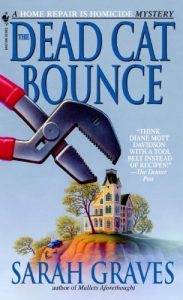 I started reading Sarah Graves books with her follow-on series to this one. It has many of the same characters but what surprised me was how much she had changed the background story of the main character. Then again, I noticed she did something similar with another character between books in her new series. It seems she simply changes the background to fit her current story.

That said, it took me a bit to wrap my head around the changes. I finally just told myself that I had to treat this series as a new one with characters of the same names and locale. Once I did that, I could enjoy the story on its own.

Jake (Jacobia) Tiptree has bought a fixer-upper Victorian in Eastport, Maine. She lives in the home along with her sixteen year old son, Sam. Her boyfriend spends a lot of time at the house as well.

Ellie, Jake’s best friend, confesses to a murder, whose victim is found in Jake’s house. She also asks Jake to investigate the whodunnit while she, Ellie, sits in jail waiting for trial.

I was able to figure out the whodunnit and several plot twists early on in the story. Still, I enjoyed reading the book and plan to continue with the series.