Fast-paced and exciting new book in this great series 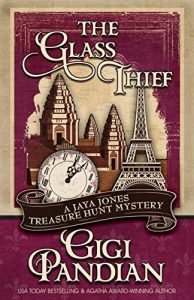 I have read every book in this series and the novellas which include Jaya Jones. I have enjoyed every single book and as each new book comes out, I discover that it is even better than the previous ones. That is saying a lot as starting with the first book, it was a wonderful read.

Right from the first, I identified with Jaya as the child that could have happened if Amelia Peabody and Indiana Jones lived in the same time period and had had a baby together.

Apparently, Gigi Pandian was influenced by both characters. I loved that the dedication of this book is for Elizabeth Peters who wrote the Amelia Peabody books. Ms. Pandian also slips references in to Vicky Bliss, another of my favorite Peter’s characters.

Jaya is a art historian who goes hunting for lost treasures to restore them to their rightful owners and to recover the past for future generations.

In this story, Jaya is pulled out of her work as a professor to solve an old murder, a current murder and find a long lost treasure. Just an average Christmas break for someone as intrepid as Jaya.

All of my favorite characters from this series make an appearance. There are many changes afoot both in relationships and locale.

The story moves rapidly and the plots are intertwined but come together at the end. There are lots of red herrings and clues, so be sure to look for them as you read. I figured out the whodunnit slightly ahead of Jaya which makes for a great mystery read. I’ve read so many that I generally can figure them out much earlier.

I’m looking forward to the next book in the series and wish it would arrive much more quickly but I guess Ms. Pandian actually needs some time to contrive and then write such wonderful mysteries. I highly recommend this series to anyone who wants a fast-paced and funny mystery.